A.C2C.L.A.I.M.: “A Christ-Cultured Community of Leaders Advancing to Impact Mankind”

The Door of Hope Christian Church is a local church with regional and national reach. Established in 1992, what came into existence rather quietly, has proven to have been divine destiny. How did it all begin? It started with a home Bible study… 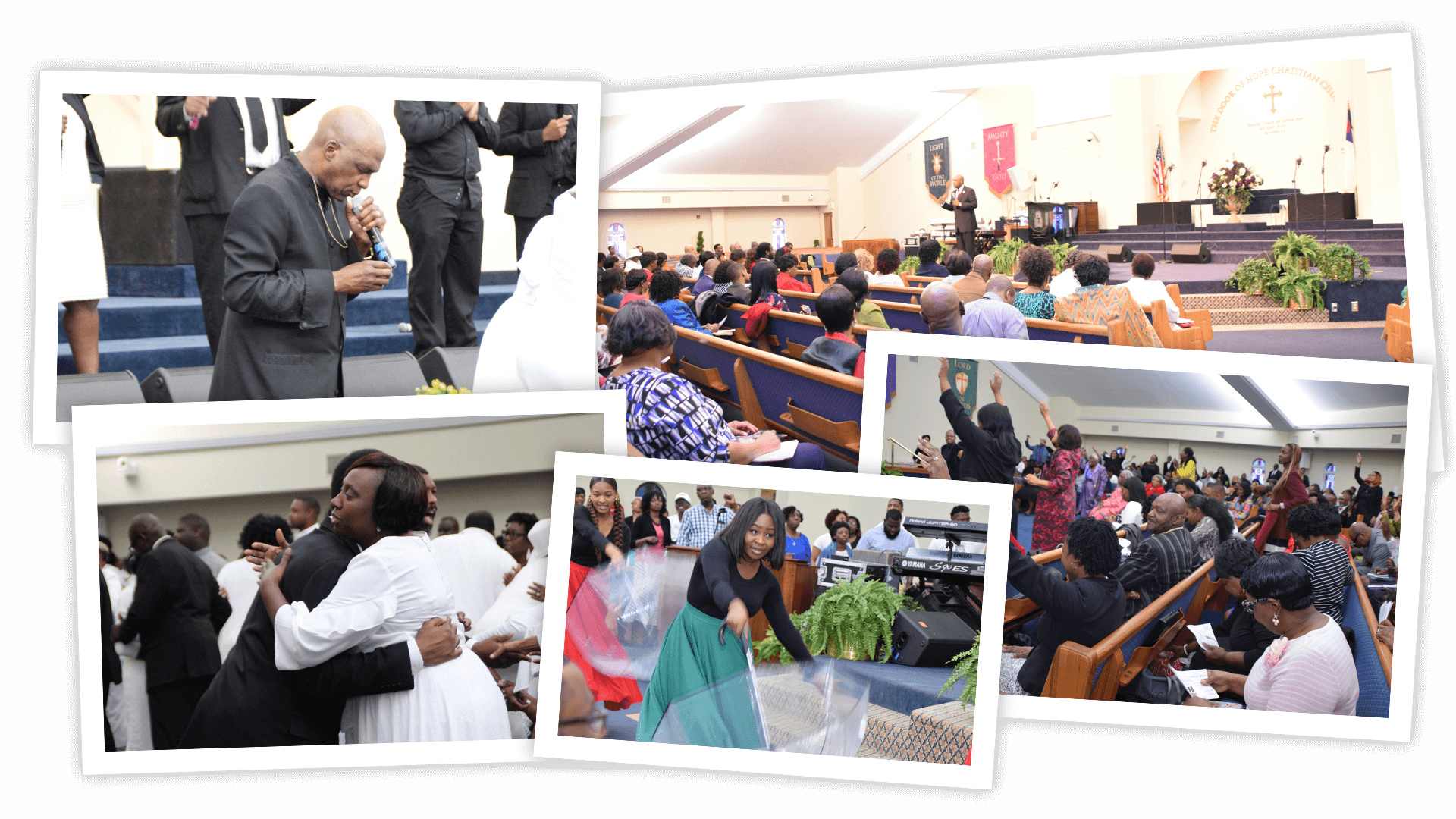 A Bible study in the home of Mr. and Mrs. Briscoe and Rosena Davis, having begun in the late summer of 1991, blossomed into a church family in February of 1992. The teacher, then Elder Michael Blue (supported by his wife, Mrs. Malinda Blue), visited the home each Thursday of the week. The impact of the Word had such lasting effect that the homes of others, were opened for the study: Mr. and Mrs. Ernest and Diane Davis, and Mr. and Mrs. Raymond and Diane Timmons made the Bible study welcome in their residences. The number of students continued to grow, and their relationship became increasingly cohesive. Finally, they covenanted with Elder and Mrs. Blue, and with one another, that they would become a church family. And on Sunday morning, February 21, 1992, the first official service was held. Thus, the unfolding of the vision commenced and continues…

It is through the providence of God that The Door of Hope Christian Church exists. In the spring of 1991, Elder Michael Blue received a word from the Lord while in prayer: Revelation 3:8, “Behold, I have set before thee an open door…” He inferred that God was saying that his ministry was about to take a new direction and new dimensions. And indeed, his ministerial works did broaden greatly that year. He preached in various areas and ministered musically with different choirs, having founded Chosen Generation Community Choir in 1990. He also began to share in a weekly Bible Study in Marion, SC, while continuing in a Bible Study at the Sellers Chapel Baptist Church, Sellers, SC. In that same year (on June 8) Elder Blue was joined in marriage to Malinda J. Tarte, of Camden, NJ. 1991 would prove to be a momentous year in many ways.

Elder Blue had met Mrs. Diane Davis through their mutual employment at Marion High School; she had told him of her sister who with her husband had recently built a home, and desired to host a Bible study there. Eventually other family members became acquainted with Elder Blue, and it was determined that he would teach. And so began, on Thursday, August 22, 1991, in the home of Mr. & Mrs. Briscoe and Rosena Davis, a study of the Word that revolutionized the lives of those who attended. They in turn invited others to come and receive. Mr. & Mrs. Ernest and Diane Davis, and Mr. & Mrs. Raymond and Diane Timmons also opened their homes to facilitate the Bible Study.

As the Bible study continued, a bond began to develop among these students of the Word, and they came to see themselves as a family — a church family. Moreover, some students began to express their desire that a permanent fellowship would be established in which the Word of God might be taught on a continual, uninhibited basis. Elder Blue very cautiously waited for a sense of God’s direction in this new prospect. (Meanwhile, some “students” were already seeking a building in which to hold services.) Finally, believing that he had ascertained the will of God, Elder Blue called a meeting.

A group of about fourteen adults met and entered into a covenant to be a church, a local assembly of the Body of Christ. The place for meeting was secured: 213 North Pine Street, Marion, SC. The financial transactions were made; the trustees led the renovations effort, and on February 21, 1992, the first service was held. On that day, over thirty people, including men, women, and children, formally joined the church. Thus, a manifestation of destiny began.

The ministry’s name, The Door of Hope Christian Church, is based upon the word received in prayer in 1991 (Revelation 3:8), and Hosea 2:15. God says in Hosea that He would provide “the valley of Achor for a door of hope.” Achor means “trouble”. God’s promise is that though this community, this nation, and this world have become a “valley”, He will use this same valley – a low, deprived, depraved, depressed place – as a DOOR into His divine purpose.

From its official beginning in 1992, the Lord has been good to The Door of Hope. Elder Blue was consecrated to the bishopric in 1997. The Ministry Center was built and dedicated in 2001. We received the “key to the city” of Marion, possibly the first ever presented to a church in the city’s history. A detailed sampling of other blessings of God includes the following: the acquisition of the ministry’s various modes (vehicles) of transportation; the God Shall Supply CD project released in 2004; the partnerships with Habitat for Humanity, FMU, and many other city, county, and regional entities that minister to needs and enhance lives; The H.O.P.E. Center after-school program; Kingdom Institute; Marriage, Men’s and Women’s Fellowships and Conferences; the Annual “Structured For Increase” Leadership Conference; serving as mother church of The Christian Covenant Fellowship of Ministries (CCFM) and host church of its annual Conference; the Kingdom of God Seminar, Youth Explosions, The Kingdom of the Arts & Media Festival; radio and regional television outreach; other media outreaches, and consistent contributions to other Pastors and Churches. The Rewarder, a three-CD audio prayer tool was released in 2010, and in December of 2010, the mortgage on the DHCC Ministry Center was eliminated — over ten years ahead of the amortized schedule! We have been privileged to host our community on several “Back-to-School” and “Back-In-School” events, the “Dr. Martin Luther King Jr. Unity March” for Marion and Marion County, and the National Day of Prayer observances. Through its financial and logistical support of the Marion County Long Term Recovery Group, we have supplied food, water, and other commodities throughout Marion County since 2016. Most recently, we were blessed to acquire WJAY Radio 98.3 FM /1280 AM in order to retain this historic venue, the only media outlet indigenous to Marion County, for the benefit of the community.

Glowing personalities, some already in the Presence of the Lord, from outside this ministry, have touched DHCC in special ways: the late Bishop John W. Barber (Bishop Blue’s pastor of 23 years); the late Apostle Robert Evans (a mentor to Bishop Blue and DHCC until his passing); Apostle Michael E. & Pastor Louise Goings (an intimate elder brother/father-figure mentor), the late Dr. Myles and Lady Ruth Munroe, and others. Time is insufficient to tell of all the miracles that God has wrought among us. Nevertheless, we have a supernatural sense that, because of Divine Possibility, the best is yet to come!